British Gas piles in with 9.2% increase blaming costs not under our control

Well it worked last year, bump the prices up for winter and make loads of money. Make sure it's not your bank account being raided by switching supplier.

Just days after SSE's 8.2% increase, British Gas announced it too would increase prices. The rise will take effect from 23rd November on its variable rate tariffs. Gas prices will rise by 8.4% and electricity by 10.4% as a national average but there are variations according to which part of the country you live in. They've also used this as an opportunity to move to the standing charge plus single rate favoured by politicians.

British Gas blame the increase on government energy efficiency policies, costs being fed back from improvements to the national grid and volatile market prices for energy.

It now seems pretty inevitable that the other big six suppliers will raise their variable rates over the next few weeks so you should treat their variable rate tariffs with suspicion. But don't just grumble about the price increases, nothing will frighten the energy companies more than seeing significant numbers of customers reacting to the price increases and switching supplier.

If the trend follows previous years, we will also see some of the better value fixed tariffs "fill up” and be withdrawn from the market with a more expensive version replacing it.

Energy companies have responded to consumer worries over continually increasing prices by offering longer ‘fixed tariffs'. However these long fixes can have a cost penalty.

The current longest fixes are from EDF Energy and npower – which allow you to fix until the end of March 2017. There is a price to pay for this guarantee – it's currently around 15% more expensive than the cheapest fix meaning the best deal prices would have to increase by around 12.5% per year before you would save money on that tariff. This tariff still has it's place, especially for those who perhaps don't switch as soon as their last deal is over?

That current cheapest fix for many will be from first:utility with their iSave Fixed v9 April 2015 tariff giving providing price security over the next two winters.

If you do want to go for a variable rate tariff, take a look at the offerings from Spark Energy and first:utility.

First:Utility have announced that they will hold their rates over this winter and their iSave v16 tariff is already one of the cheapest on the market.

Spark Energy have returned to the market with their Spark Advance 2 tariff after withdrawing it's predecessor on the 24th May. Though there are no price guarantees on this tariff, there are also no penalties for leaving if they increase their rates. One of the factors that make the Spark Advance 2 tariff so competitive is that you actually pay "in advance” for your energy rather than after you've used it so you have to maintain a credit balance with them. In our experience, customer communications from Spark haven't been the best, indeed Ofgem launced an investigation into their complaints handling, billing practices and switching process on June 28th. Hopefully, their return to the marketplace is an indication that they've got their act together.

You would expect to get the best prices by going for a dual fuel deal, but it's not necessarily the case. As suppliers try different approaches with standing charges and usage rates and some of the new energy companies only offer one or the other, you can actually find it's cheaper to get your Electricity from one supplier and Gas from another. We found a 2% saving* on the best by doing so – just look at the Gas Only Price and Electricity Only Prices on the results table when running a comparison. One warning with this approach is to check what will happen at the end of any fixed terms on each separate contract. You don't want to be forced into only looking for a single fuel or paying termination fees when a fixed term on one fuel ends but hasn't on the other!

Price changes for the Big 6 announced since 2011 are detailed below: 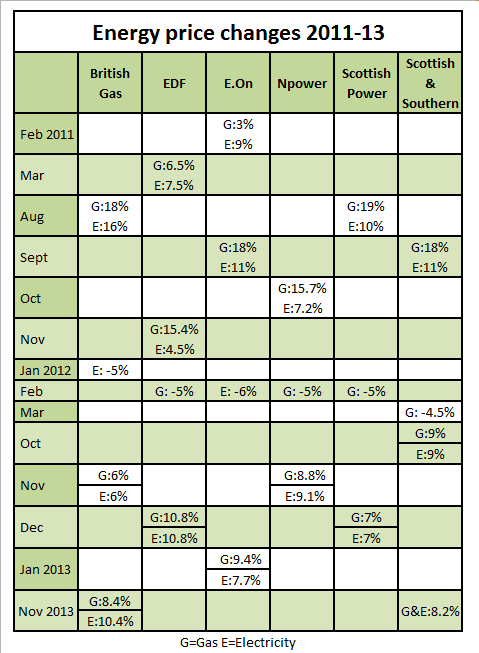 - Will winter tyres be provided with my car hire?

- Will Travel Insurance Policies be affected by Brexit? Will my EHIC card still be valid?

- How will Car Hire Excess Insurance Policies be affected by Brexit?