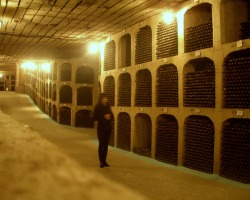 Compare and find cheap car hire in Moldova with MoneyMaxim

An international driving permit is not normally required for hiring a car in Moldova.

The Foreign and Commonwealth Office warn to be careful if travelling into the disputed/independent Transnistria region.

Dipped headlights should be used at all times between 1 November and 31 March.

Moldova is well known for its wines. The Milestii Mici winery has the largest wine cellars in the world. According to the World Health Organisation, Moldova has one of the highest alcohol intakes per person in the world. This may be one of the reasons for the zero alcohol limit for drivers.

There is limited car hire available in Moldova and it isn't the most competitive marketplace in the world. Larger and luxury cars may be hard to track down but there's a good selection of smaller cars.

Car hire tends to come with full insurances and, certainly by European standards, relatively low excesses. That may leave you responsible for the first €300 or so and you will also find easily damaged items like tyres, windows and the underside of the car won't be covered.