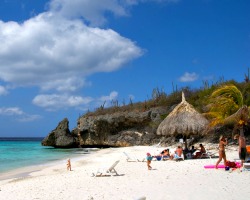 Car Hire in the Netherlands Antilles

You will normally need to produce an international driving permit to hire a car in the Netherlands Antilles. This will be even more important if you still only have a paper licence. Check for any requirements with your car hire company.

There's a wide variety of suppliers covering the Netherlands Antilles Islands resulting in a broad spectrum of car hire choices. This has both positive and negative effects. You need to check carefully exactly which insurances are included in the headline price and what is an optional or compulsory extra cost.

Budget, for example, often does not include collision damage waivers but allow you to decline their offering if you want to provide your own - at least on the island of Curaçao.

National, on the other hand, include a collision damage waiver but don't include a theft waiver - for which there is a compulsory additional charge.

The upside is that, when combined with MoneyMaxim's car hire excess comparison service, you can make sure you're covered for what you want to be and have the best deal.

The main airport locations in the Netherlands Antilles are: