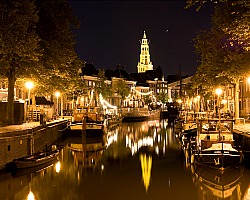 Car Hire in the Netherlands

Driving in the Netherlands

Standard speed limits unless otherwise marked are 50 km/h in built up areas, 80 km/h or 100 km/h outside built up areas and 130 km/h on motorways.

Dipped headlights during daytime are not compulsory but are commonly used.

Be particularly aware of trams, they have right of way except when crossing a priority road and their drivers are used to other vehicles giving way to them.

You must also give way to buses when pulling out of bus stops in built up areas.

The drink driving limit in the Netherlands is lower at 0.05% blood alcohol than the UK's 0.08% and a lower limit of 0.02% applies to younger or less experienced drivers. The AA has further information

Cross border travel to most other European countries is normally permitted but please do check with your car hire supplier for specific conditions and charges. Also note that during winter, cars driving into Germany must be fitted with winter tyres - which may already be fitted or may not even be available at extra cost on cars hired in the Netherlands so check the rental terms. Where winter tyres are an extra cost item they tend to be very expensive €15-25 per day so it's worth checking if it's likely to affect you.

Satellite Navigation devices are readily available but can be expensive to hire. €8.00 per day is about the minimum but you can pay more than double that.

Most car hire comes inclusive of collision damage and theft waivers, excesses are around the (high) European norm €600 to €1000 being commonplace for modest compact cars like a Golf, Astra, Fiat Bravo etc. Tyres, windscreens and underside of the car will be excluded from these waivers. Compare car hire insurance using the MoneyMaxim comparison service before paying for additional waivers from the rental company.

However there are some exceptions to this level of cover. At the time of writing. SiXT for example, does not include their Theft Waiver as standard in the Netherlands but makes it a fairly pricey extra.

According to their location terms, Budget's third party insurance leaves a lot to be desired giving just €6,000 for property damage and €20,000 for personal injury or death. Apart from being inadequate, that's also not legal according to EU Law so we suspect a documentation issue but you may wish to obtain clarification.