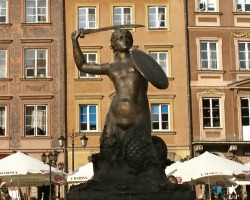 What you need to know about hiring a car in Poland

Use of dipped headlights or daytime running lights is required at all times.

Speed limits are generally slightly higher than the UK. Unless otherwise signposted the usual limits are 50km/h in built up areas, though curiously they allow you to go 10km/h faster at night between 11pm and 5am. There are also 20km/h zones. Out of town the limit is 90km/h on single track roads or 100km/h on two-lane express roads, 120km/h on dual carriageways and 140km/h (86mph) on motorways.

It is not unheard of for police to demand cash from foreigners for on the spot speeding fines. The Polish drink drive limit is much lower than the UK limit at 0.02% blood alcohol (ours is 0.8%) with jail sentences starting at 0.05%.

Most of the motorways are toll roads.

Rentals booked through our site will include full insurance packages and you can expect excesses between €400 and €1,200 on your collision damage waiver. Poland is one of the countries where theft waivers sometimes carry significantly higher excesses than they do for the collision damage waiver but most will be adequately covered by any of the car hire insurance policies on our comparison service.

It's not too hard to find car hire with the first additional driver included in the rates and most don't charge excessively, typically under €4 per day. There are some that charge much more - we've seen €23.37 per day with one supplier so do check the terms and conditions if you need additional drivers and, if they don't say, it might be safest to assume the worst.

Child seats and booster seats may be charged by the day or by the rental. so if you're hiring for longer periods, it'll be worth seeking out the latter.

Satnavs are commonly available but at around €8.50 per day, quite expensive.

Winter tyres are recommended for winter use and compulsory if you cross the border into Germany. Many rental firms include winter tyres without charge but some (particularly the big American chains eg. Avis, Alamo) make it a compulsory purchase during winter months.