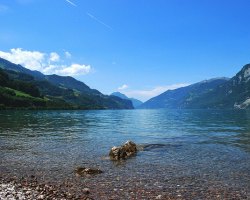 Driving in a different country means getting used to different rules and customs, Switzerland is no exception to that. Most of the nationals in Switzerland are highly compliant of driving regulations, here are a few of the need-to-knows for Switzerland:

Due to new EU regulations it is very important that you inform your hire car company if you intend to take your hire car out of Switzerland and follow their guidance.

Swiss drivers tend to drive at the speed limit - and their police frown on those who exceed the limit. Fines are severe for those who do speed.

Cars must be equipped for the conditions, which when at altitude may include snow chains.

If you are travelling into France from Geneva you should be carrying a reflective jacket and a warning triangle - the triangle is also required in Switzerland, but the jacket isn't so ask for one when you pick up your car.

From January 1st 2014 it became compulsory to use dipped headlights during the day on all vehicles. They are compulsory when passing through tunnels even if they are well lit, and a fine is imposed for non-compliance.

Driving Rules That Maybe New to You!

During daylight hours outside built up areas drivers must sound their horns before sharp bends where visibility is limited, after dark this warning must be given by flashing headlights.