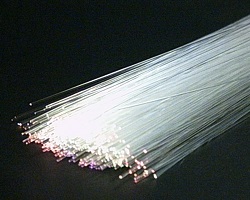 Fibre Broadband is rolling out right across the country right now. As superfast fibre becomes available to more and more households prices are starting to fall fast. More and more companies are offering fibre broadband so it is definitely worth shopping around for the best deal on your broadband. Always compare the deals suitable for your needs. There is no point in choosing the cheapest option only to find it can't cope with 4 if you gaming at the same time!

There are now many more fibre-optic broadband suppliers in the market and this is creating both price and service competition, bringing huge benefits to the end user.

MoneyMaxim can help you compare the offers that are available and find a great deal, whether you're after the fastest speeds or just want to take advantage of lower prices.

Is fibre optic broadband for me?

Are the increasing number of fibre optic broadband packages over-priced and over-hyped, or the only way to stay connected? We ask whether superfast fibre optic internet is really worth the extra cost, or if your best bet is to stick with the cheaper option of an ADSL connection, at least until prices for fibre start to fall.

Find out what noticeable differences the extra speed will make to your everyday browsing and TV streaming experience, how urgent the need is to splash out on a superfast internet connection for your home, and when you can expect fibre optic broadband to become available across the UK, including in rural areas.

Looking for the best broadband deal? We review and compare all the leading packages

What is fibre optic broadband?

Ofcom classes superfast broadband as any connection offering speeds of 30Mbps or more. But an easier way of understanding it is to think of how it is delivered – standard (ADSL) broadband is transmitted over traditional copper phone lines, while superfast uses fibre optic cables.

Fibre optic’s key advantage is that it’s far quicker – the average ADSL speed is 5.9Mbps, compared to 362Mbps for Virgin Media’s fibre network, and 67Mbps for BT’s fibre network (also used by other internet service providers such as Plusnet and TalkTalk). Most ISPs offer a range of packages with different top speeds.

While this all sounds appealing, superfast broadband does, however, have two key drawbacks – price and availability. Even the cheapest package typically costs at least £10 more each month than standard ADSL and will usually lock you into a long contract. And even if you’re happy to pay the extra, many parts of the country still can’t access the faster networks.

What are the benefits of faster speeds?

Fast speeds allow for quicker downloads, and will also help to reduce the problems caused when different family members log on at the same time. They let you seamlessly enjoy services such as online radio, video on-demand and catch-up TV at the same time, while fibre’s faster upload speeds make life easier when you’re sharing photos online or making video calls.

As the graphic below illustrates, at its fastest the difference between downloading a film from a service such as iTunes or BlinkBox is about 90 seconds for fibre optic vs around 20 minutes for ADSL. A good fibre connection should put an end to any stuttering and buffering of on-demand TV too; though so might switching to a different ADSL provider.

Do I need to go superfast?

Fibre broadband is great but isn’t necessary for everyone. For browsing the web, checking emails, uploading the odd photo to Facebook and even streaming from BBC iPlayer or Netflix, you don’t need a superfast connection.

For iPlayer you need 2Mbps of sustained bandwidth to watch standard definition content or 3Mbps for high definition, while the minimum recommended broadband speed for Netflix is 1.5Mbps. However, you will likely benefit if you regularly:

Where is fibre optic broadband available?

While more than three-quarters of the UK can now get superfast broadband, large swathes of the country can still only access ADSL. These are typically rural areas, where the distance from the telephone exchange means that speeds can slow to a crawl.

Ofcom’s figures reveal that, although average speeds in rural areas are improving, the gap between them and urban areas has got wider. In 2010, the government announced an £830 million strategy designed to improve this situation.

The plan was meant to ensure that by 2015, 90% of the population would be able to access superfast speeds of 24Mbps or more, and everyone would be able to get at least 2Mbps. However, the National Audit Office revealed that the rollout was about two years behind schedule and only nine of 44 rural areas had high-speed internet by 2015. The target of 90% of premises was achieved by June 2016. Phase 2 target of 95% was set for the end of 2017 but is still not complete.