How will Car Hire Excess Insurance Policies be affected by Brexit?

We offer the latest information regarding car hire excess insurance policies, and how Brexit might impact you if you are hiring a car after we leave the EU. 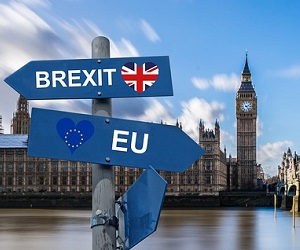 If you are expecting to rent a car after Brexit could your plans be affected?

It is now almost certain that the UK will leave the EU on the 31st January 2020 with an interim arrangement in force that will apply until the 31st December 2020.

This means that, for this year at least, driving abroad - whether as a UK resident going to Europe, or as a EU resident coming to the UK - will be under the same arrangements as we currently have in place.

This means the following if you are hiring a car abroad or have bought a stand alone excess insurance policies such as those available through the MoneyMaxim Car Hire Excess Insurance comparison service.

During the transition period - which is expected to end on the 31st December this year - there will be no change. During that period a longer term agreement will be agreed which will cover driving licences and whether UK licences will be recognised in countries which are currently part of the EU.

During the transition period car hire excess insurance can be bought by both residents of the UK and, where insurers allow it, in other countries as well. Even annual policies that extend beyond the year end are unlikely to be affected as these are reimbursement policies rather than primary insurance and so will therefore still cover incidents that occur outside your home country. Really this just as it is currently where there is no difference to the process whether you have an accident in an EU country such as France or Spain, or a non EU country such as Turkey or Switzerland.

There is always the potential that the UK and EU agree to change the rules during the transition period - although a detrimental change seems highly unlikely.

A new agreement is struck

The Prime Minister is on record saying that he believes new agreements will be in place by the end of 2020 - and, if that is the case, it is likely that we will learn more about these as 2020 unfolds.

If no deal is possible we would in all probability fall back on agreements that are in place between the 27 individual EU member states and non EU members.

In practice this is really something you do not need to worry about until the start of December 2020 unless you have a long trip to an EU country planned that will mean you are still overseas on the 1st January 2021.

This means that we will no longer have common arrangements with both countries within the EU / EEA and with countries which are in other parts of the world but where our current arrangements are determined by the fact we are an EU member. If we leave the EU without a deal there are a large number of countries where the International Driving Permit (IDP) requirement will change and action will be needed.

If you are hiring in the Republic of Ireland you will not need an IDP as Ireland doesn't require IDPs to be held by driving licence holders from non-EU countries.

If you are intending to drive in the European Union or EEA (apart from Ireland) the map below indicates the type of IDP that is required. Be aware you will need both if you plan to travel, say, through France to Spain. 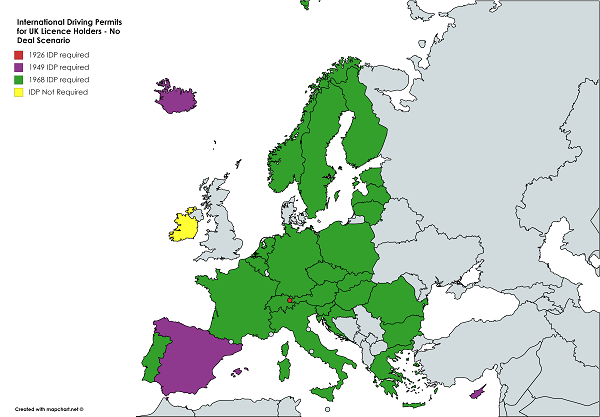 If you are driving outside the EU please refer to the Government website covering International Driving Permits which lists the IDP required both now, and that which will be required if we leave on a no deal basis.

No change is expected if your policy is already in force. You may hear from your insurer spelling out any changes - in particular to the administration of your policy.

For UK residents there will, at least in the short term, be no change.

For EEA / EU residents some policies may be withdrawn from sale as UK insurers may not have permission to sell policies to EU / EEA residents. We are expecting though that a number of policies will continue to be on offer, and some insurers have set up shop in EU countries so that they will be able to direct customers to EU / EEA regulated offices.

There is more potential for confusion with regard to travel insurance - as a number rely at least in part on the EHIC (European Health Insurance Card). Read our article covering Travel Insurance and Brexit for more information.

Image courtesy of: Tumisu at Pixabay