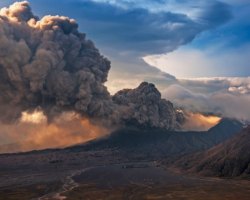 Compare Travel Insurance covering Volcanic or Strikes. Policies start at a small cost and prevent stress and worry in the event of unexpected disruption.

Travel Insurance which covers the risks relating to the possibility of travel disruption from volcanic ash clouds or strike action is often sought after. Unfortunately this is often after an event has occurred (such as a volcanic eruption or strike being announced), and then travellers' options are more limited. Sometimes though you may be travelling to a country which has had eruptions in the recent past.

Following the three major volcanic eruptions in Iceland since Spring 2010 there has been steady interest in policies that will provide additional cover. In 2015 there were travellers stuck for uncomfortably long periods in Bali, Lombok and East Java in Indonesia following an eruption in the region. In 2017 more eruptions have taken place on Bali and a volcano on Tenerife has also caused concern.

Given the fact that such events appear to be occurring more regularly and that they can last for a considerable period (the Chilean volcano which erupted in 2011 caused disruption to flights over a 5 month period), canny travellers are ensuring that their insurance policy covers them for such eventualities, especially as they arrive so quickly, and therefore reduce options for holidaymakers to cover themselves once an eruption has occurred.

Many insurers have now excluded cover for 'Volcanic Ash' incidents unless specific cover is taken.

Do be aware that if you are taking a package holiday your tour operator will be responsible for looking after you and getting you home. However the more comprehensive of the policies listed below are ideal for the growing number of travellers who book flights and accommodation independently.

Please note that there are often criteria in order to claim. Delay claims are usually only considered after a minimum of 12 hours delay for example. Cancellations as a result of volcanic eruptions may only be eligible if your accommodation is within a certain radius. Please read all terms and conditions of any travel insurance policy carefully before purchasing.

Travellers do need to be aware that, although the laws relating to airlines' responsibilities have been clarified and tightened recently, if you are stranded following a volcanic ash event, this doesn't mean your hard-earned cash is not at risk if you fall foul of such an event. Some of the main ways you can still be out of pocket include:

We detail below some of the insurers who now offer these 'add ons' which can, as well as covering volcanic ash, also cover previously unknown risks including natural disasters, volcanic ash clouds, wildcat strikes, flu pandemics and more besides - as long of course you 'add them on'.

Normally Columbus do not cover any claims for travel delay, abandonment, missed connections or missed departures as a result of Volcanic Ash. They do offer a Volcanic Ash upgrade to Silver and Gold policyholders which removes this restriction for such claims.

Policyholders who buy the Columbus Direct Gold policy can upgrade to an option which offers both the Volcanic Ash upgrade and an Emergency Travel Upgrade which helps passengers pay for alternative ways home or emergency accommodation in case of being stranded overseas. The maximum claim per policy is £4,000 of expense.

Flexicover have only relatively recently started offering an upgrade to cover travel disruption. Their policy now allows you to add comprehensive cover for Cancellation or Curtailment, paying for substitute accommodation or providing a payment to help with extra expenses during an enforced stay if you are stuck abroad.

It's wide cover for one extra payment, rather than having to take separate volcanic and disruption cover and will, we think, prove popular with those wanting to make sure they have options if their trip is disrupted.

Aviva have an upgrade policy costing around £5 per single trip policy for each traveller, or £12 per traveller on annual policies (although for families they will only charge for a maximum of two children) that will cover 'Airspace Closure' - for any reason from terrorism to the actions of a volcano, hurricane or pandemic. More information can be found on the Aviva website. Aviva cover those up to 79 years old, but don't cover pre-existing medical conditions.

Aviva sell the upgrade online - click to say that you want their Airport Closure option - which means you also get a 10% online discount.

Provides additional cover for a range of events that might cause disruption to your travel plans such as strikes (outbound leg only), snowfall, Foreign Office advice, food poisoning and pandemics.

Whilst strikes are not covered on the home bound leg, the Aviva policy will provide its standard cover in this respect. If you want to have the option of having alternatives for a homeward leg if a strike is called by airline staff consider the Columbus policy.

Visit the Aviva website for full details. . So which policy is best for you? It really depends on the level of cover you want to take - Cancellation only, Cancellation and Get You Home / Extra Accommodation costs in case of a Natural Disaster, or whether you want the latter with Strike cover included too. It's really up to you!

These policies do change so always read policy documents carefully before purchasing.

Image courtesy of: TeddyBear[Picnic] at FreeDigitalPhotos.net