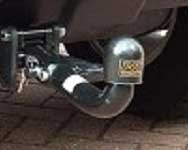 Find car insurance for cars with towbars fitted, pay no more, but make sure you are fully insured

It's particularly important as some insurance companies refuse to insure cars which have had any type of modification, so would, in the event of a claim say that if they had known a towbar was fitted they would not have offered a quotation in the first place. This can leave motorists, who may have been unaware of the need to make the insurer aware of the towbar, facing a large bill for the costs of an accident.

Will having a towbar fitted increase my insurance costs?

It could do, but doesn't need to. Many insurers will cover a towbar fitted car without an additional premium. However, you could face an extra bill if you have fitted a towbar to your existing car or bought a new car which has a towbar fitted to it and advise your existing insurer. They may ask for a 'change in circumstances charge' or 'in year policy adjustment fee'. Insurers are increasingly using such fees to enhance their income from existing customers. It is worth, if you are faced with an unreasonable increase, getting a quote for a new policy with the towbar already fitted as it could be cheaper to cancel your existing policy, pay any cancellation fees and start afresh.

Can my existing insurer cancel my insurance if I have a towbar fitted?

Yes - some insurers have very strict guidelines on what cars they will insure. This is particularly the case with some of the big names who negotiate low prices for mass market customers who fit 'the norm'. Once a towbar is fitted, you are outside the tight band of vehicles that they can quote for and they may not be able to cover you. Don't worry though - all is not lost!

Why would an insurer want to know whether I have a towbar fitted?

Having a towbar fitted to your car does mean a marginally increased risk for an insurer - some would include this in their base premiums. Others, and particularly those who look to cut every last penny off their base price to improve their comparison table position (where a pound can mean a difference between heading a comparison table and being in fourth place), won't.

If you have a towbar on your car you can pull everything from a caravan or boat to a jet-ski or even another car - but that does present risks to insurers as they are liable for third party claims if you should have, for example, a reversing accident. Whilst motorists may have a long claim free driving history, they may be new to towing and it's not something covered in a driving test!

Car insurers may place a restriction on the type of vehicle you are towing - for example some insurers will only allow single axle trailers to be towed. If, however, you have a dual axle trailer, don't despair - our partners have plenty of insurers who can help.

How can I find cheap insurance for a towbar fitted car?

Many of the insurers on our standard insurance comparison service will cover cars with towbars - and many of those without asking for an additional premium. Run a quotation now. Some companies will give you a quotation including the towbar, others may ask you to advise them when you visit their site, but any companies who just will not entertain cars which have towbars fitted will have been removed.

If you feel that the premium is expensive, or if it's over £350,call our specialist car insurance partner Adrian Flux on 0800 181 4542, who specialise in towbar fitted vehicles. They are brokers who have special plans for such vehicles and, as brokers, are able to tailor policies to a degree you are never going to be able to achieve on a comparison site.

Another insurance broker who specialises in towbar fitted vehicles is Insurance Choice who also have a panel of modified car insurers. Again it's really better to talk to them rather than try the online route so do call them on 0843 227 0120.