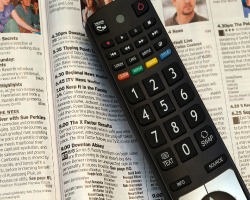 Once upon a time there would be one television in a home, usually in the living room. Now we often have more than one, perhaps in the kitchen or a playroom. In a house with teenagers there are frequently televisions in every bedroom! Many are not simply used as TV's but also for computer gaming and the breakdown of one can be a headache for parents.

For a household with one television, not being able to afford to replace yours if it should develop a fault, can be frustrating - particularly during the football season or if you are a fan of The Great British Bake Off. Who wants to miss that crucial match or the antics of those bakers? For many, weekday evenings revolve around sitting down with loved ones to watch our favourite programmes, televisions are therefore very much a part of daily life!

Television insurance is one way you can have peace of mind should your TV breakdown or accidental damage occur. With cover you can be reassured that in these situations it can be replaced or repaired without a hefty bill. Insurers can also provide discounts for the second and third television to be insured.

Should you have numerous home entertainment devices around the house, such as televisions, radios, DVD players, games consoles and home cinemas, to name a few, you may want to consider a home entertainment insurance policy. This would insure multiple devices under one policy, often being more economical and easier to manage then numerous single device policies.