Charlie and Ruby have been identified as those most used by us when it comes to naming our car - and a quarter of have us have a pet names for our cars.

**Charlie and Ruby have been revealed as the UK's most popular car names, according to new research. 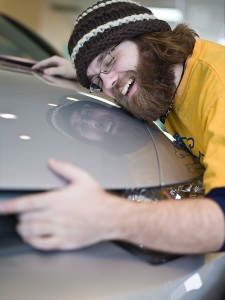 The research found that an incredible 33% of motorists admit to talking to their car. These ‘car-versations' involve talking to vehicles about the drivers day-to-day business and their frustrations with the road.

Some admit to discussing relationship and personal problems with their much-loved cars.

Over a quarter of drivers have a pet name for their loveable automobile and the most popular names are proving to be Charlie and Ruby. The average UK driver considers their car to be female, giving them personality traits too.

The average car has a personality that is 25% sensible, 8% cute and 7% playful. Those with ‘female' gender cars consider them to by 6% sexy and 5% mischievous.

Peter Collett, Psychologist and author of ‘Driving Passion – The Psychology of The Car', suggests that naming your car can reduce the risk of incidents on the road.

"A majority of car owners feel the need to give their car a distinctive name, usually an affectionate title that expresses how they feel about their car and how they regard it as being different from everyone else's.

The move to personalise a car in this way appears to be quite common and it also lays the foundation for finding out how people treat their cars.

"By giving their car a special name, drivers are treating their car as something that deserves to be cared for – a friend, a pet, a companion, sometimes even a lover,” said Collett.

Even celebrities have become caught up in the craze with American President Barack Obama apparently having named his Ford Escape Hybrid ‘The Beast', and fame monster Lady Gaga has naming her Rolls Royce ‘Bloody Mary'.

Nearly half of UK drivers would consider their car to be part of the family. How far would you go to protect your car? Compare car insurance prices to ensure that your car has the best cover on the market, whatever their name is!