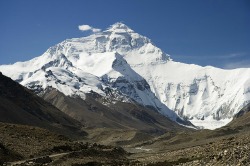 On the 29th of this month it will be 63 years since Edmund HIllary and Tenzing Norgay became the first men to reach the summit of Mount Everest. The historic climb to 8,848 metres above sea level took them a gruelling 7 weeks. But, if it is possible to surpass such an enormous feat, then British climber Nick Talbot may be first in line to succeed. Nearly two weeks ago, on the 13th May, he became the first cystic fibrosis sufferer to ever reach the peak. Given the impact cystic fibrosis has on the lungs and breathing, this is truly amazing and testament to Nick that he hasn't let his illness hold him back.

If you are a fellow CF sufferer or live with a different pre-existing medical condition, we want you to be able to see the world too - though for most of you that probably won't be as the view from the top of the Earth's highest mountain! Travel insurance is available to cover all kinds of conditions from companies who specialise in providing travel insurance to those who have specific needs or requirements.

It is always important to be honest with insurers about your illness as if you fall ill abroad and you have not disclosed it, you will not be covered and could face a hefty bill. And don't forget that if you are travelling with someone else and they have to cut their holiday short, they may not be covered either. If you are planning on taking part in winter sports (climbing included!) many of these specialist companies will provide insurance for more adventurous activities too.

Cystic fibrosis is an inherited condition. A defective gene causes mucus to build up in the lungs and the digestive system. Sufferers often have trouble breathing, are prone to infections and many have to take medication to help with their digestion. Although it is a life-limiting illness, more than half of those with the condition will live past the age of 41 and it is hoped that the 5 babies now born with CF every day will live way beyond that as treatments improve. Nick raised over £80,000 for the Cystic Fibrosis Trust as a result of his climb which will go a long way towards achieving this goal.

Pre-existing medical condition travel insurance is available to help you enjoy that holiday you have always wanted. It can also be beneficial if you are travelling with others to all be covered with the same insurer. That way, if you should be taken ill whilst on your travels then your companions can be covered too.