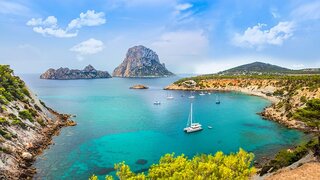 Ibiza is one of Spain's holiday islands. It is part of the Balearics group and Ibiza airport serves not just Ibiza itself but neighbouring island Formentera. There are over 8000 flights through the airport every year from around 13 countries.

The airport is at its busiest in the summer season between May and October where the amount of direct destinations increases including the addition of London Gatwick and Dublin. During the rest of the year there are flights to mainland Spain, Paris and Geneva amongst others.

Ibiza is not just a party island; there are experiences for all the family including Ponylandia (for everything to do with ponies), flea markets to browse around, as well as Cova d'es Culleram cave and the Murallas (the city's fortifications) to explore.

Which car hire companies are at Ibiza airport?

As a popular tourist destination there are understandably a number of car hire companies with offices at the airport. The following companies have offices on level 0 of the airport building:

Other car hire companies including those below are based off-airport and you will need to take a shuttle bus to collect your car.