In the last 30 days, a total of 5.2 million motorists have passed through a red light signal. Almost one in ten do not even slow down for amber lights.

In the last 30 days, a total of 5.2 million motorists have passed through a red light signal, a new study has found. Almost one in ten do not even slow down for amber lights. 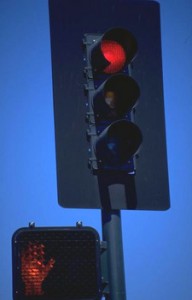 Motorists in the UK are driving through 12million red lights each month, new research from Direct Line Car Insurance reveals. This is the equivalent of running 278 red lights every minute.

According to the report, 14% of motorists (over 5.2 million) admit that they drive through an average of two red traffic lights each month. In addition, a further 760,000 motorists (2%) habitually don't stop at red lights if they feel the road is clear and there is no traffic.

This lack of respect towards red lights, however, is exposing them to run the risk of losing over 36 million penalty points (three for each offence) and of facing fines from fixed penalty notices of an average of £721 million every month.

Analysing these risky habits per UK region, the West Midlands (19%), Scotland and London (both with 16%) are the three areas with higher percentages of drivers passing through red lights in the last month. Drivers in the East of England, in contrast, are the least likely to drive through red traffic signals accounting only 9% of their motorists doing it.

On top of this, it was published recently that single male drivers under the age of 21 have been hit with an estimate of £4,000 for annual car insurance payments.

Considering the risky habits of some British drivers, it is not surprising that car insurance companies set highest premiums for motorists that are more likely to drive in a dangerous way.

In fact, over 1.5 million of those surveyed (4%) admitted to ‘getting a thrill' when driving through amber traffic lights that they know will have turned red before they have passed through the crossing or junction.

Despite the ‘thrill' drivers might feel this behaviour can lead them to pay more in their car insurance in case of an accident.