A surge in breakdowns and accidents are expected this Easter as families over pack their cars, compromising passenger safety, new research shows. 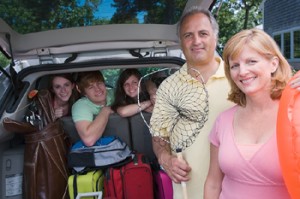 A surge in breakdowns and accidents are expected this Easter as families over pack their cars, compromising passenger safety, new research shows.**

One in ten Brits pack their cars full to the brim for every eventuality when driving to UK holiday destinations, the research by LV= found.

Over eight million motorists have overloaded their cars in the last five years, and 180,000 drivers have broken down as a result.

"With Easter upon us and the excitement of summer holiday season fast approaching, it's completely understandable that motorists may not be considering the dangers caused by overloading their car,”commented Peter Horton, Britannia Rescue managing director.

"It's vital to put safety first, especially when UK roads are in such a state of disrepair.”

The research showed, a third of people worryingly drive with doors, windows, a sun roof or boot open to accommodate a large load.

LV= predicts 6.7 million Brits are set to drive to UK holiday destinations this Easter, and 17.7 million this summer, and the problem of breakdowns is exacerbated this year by the state of the UK's roads. The harsh winter has damaged the surface of many roads leaving numerous potholes for motorists to contend with.

If cars are overloaded they are more likely to breakdown when driving over potholes as their suspension is compromised by the load.

The majority of Brits packing their car to the brim intend on taking food and drink with them, 64 percent, while 40 percent will pack entertainment equipment such as laptops, video games and MP3 players, while 16 percent will pack cooking equipment too.

For those taking to the roads this Easter ensure your car is suitably insured, and check your gadget insurance covers all the electronic equipment you are taking with you.