You can follow the fashion trends even in your hire car

Four weeks of fashion shows kick off in New York followed by London, Milan and Paris 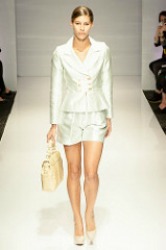 Today sees the start of New York fashion week, the first of four weeks of catwalk shows - the other three being London, Milan and Paris. If you are a fan of fashion then these four cities are great places to visit to fulfil your passion. Combine it with a car hire and you have the freedom to explore not only the cities but their surrounding areas too.

The collections shown in these four weeks will be in stores for Spring/Summer 2017 but the shows also provide inspiration to other designers. Only journalists, buyers, bloggers and well-known personalities are likely to get seats at these events but the cities are worth visiting at any time of the year.

New York is such a vibrant city and has so much to take in. Designers including Lacoste, Desigual and Alexander Wang will be showing their latest pieces on the catwalks at this week's fashion extravaganza. If you want to see the latest collections available then head to Fifth Avenue where there are a host of flagship stores for many well-known brands. By staying outside the city you may save yourself money on hotels. Hiring a car in New York for a week can cost around just £297. From New Jersey you can park at Staten Island Ferry port and sail across to the city. Take a day trip from the city to Coney Island for a fun day out by the beach.

London Fashion Week runs from the 16th-20th September with shows from Burberry, Topshop and new designer Molly Goddard. Sloane Street is recognised worldwide as a luxury shopping destination with stores including Gucci and Dolce and Gabbana. It is a chance for some retail therapy in the heart of London - visit some of London's other attractions while you are there or drive out of the city. Using your hire car - which can set you back as little as £98 - you can explore further afield. Oxford, for example, is also a great place for shopping and sightseeing, and only 2 hours drive from the capital.

Perhaps you would prefer to visit Milan? This beautiful city is home to not only La Scala and Leonardo da Vinci's The Last Supper but also a, perhaps, underappreciated piece of architecture - the Galleria Vittorio Emanuelle II. It is one of the oldest shopping centres in the world but in itself is worth seeing. It also houses many of the world's leading fashion labels. Alternatively there is Via Monte Napoleone, a street lined with upmarket fashion and jewellery stores. Roberto Cavalli, Fendi and Versace will all be exhibiting their latest collections during fashion week. A hire car from just £63 will enable you to visit the rest of the Lombardy region at your leisure.

Paris finishes off the four weeks. Running from 27th September until 5th October, anyone lucky enough to have tickets will be able to see shows by Christian Dior, Issey Miyake and Balmain. Paris's tourist industry has suffered as a result of the terror attacks and the strikes during the world cup but it remains a wonderful city to visit. Avenue Montaigne is a favourite haunt of fashion aficionados. This high end fashion street is home to stores such as Armani, Louis Vuitton and Valentino. Stay a little longer and use a hire car costing from about £60 for a week to see more of France. Just an hour and a half's drive from Paris is Giverny where you can look in on Monet's home and garden including the Japanese bridge made famous in his paintings.

We hope we have inspired you! If you require any further assistance with your car hire, car hire excess insurance or travel insurance then please feel free to contact us via our webchat facility or call us on 0800 520 0699. We would love to hear from you.