Pedestrians are putting their lives at risk as a new study reveals a quarter of Brits do not look both ways before crossing the road.

Pedestrians are putting their lives at risk as a new study reveals a quarter of Brits do not look both ways before crossing the road. 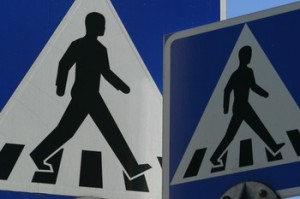 Almost two thirds, 64 percent, of British adults are not adhering to the rules of crossing roads we drum into children, the Street Walk study by Sheilas' Wheels car insurance found.

Nearly half of adults admit they do not listen before crossing the road, while 46 percent do not stop, and 23 percent fail to look both ways. Even more alarmingly, 71 percent of those polled in the study said they did not know if traffic came from the right in the UK.

"It is shocking to see pedestrians risk their own lives for little more than shaving a few seconds off their journeys as the roads are still as dangerous as they were when we were first taught the Green Cross Code in school,” Jacky Brown at Sheilas' Wheels car insurance commented.

"Stop, look and listen is timeless advice as it will not only protect our own lives, but also those of other road users and ensure that younger pedestrians do not pick up our risky bad habits.”

One in ten Brits say they have come into contact with a moving vehicle while crossing the road, and 25 percent admit to having had a near miss in the past.

Worryingly, adults are also unwilling to intervene when children cross the road dangerously, as 72 percent admit they do nothing when they see children behaving dangerously on the road.

Talking on a mobile phone was the top distraction listed by pedestrians for failing to cross the road safely, as 45 percent confessed to doing, while 21 percent also admit to texting and 29 percent to listening to music.

Technology is not just to blame for pedestrians' lack of concentration with road safety, as a recent study by Santander car insurance also revealed men are twice as likely to crash their cars due to distractions such as adjusting the car radio.