After a four month investigation, the OFT have not found evidence of unfair competition in the road fuel market. Price rises due to crude oil price and tax. 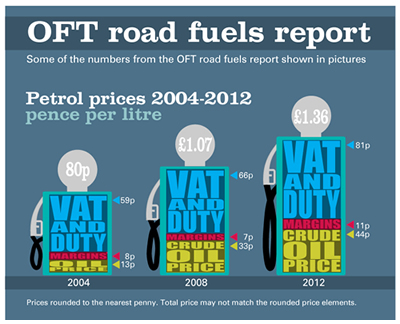 The Office of Fair Trading reports today that rises in pump prices over the last 10 years have been caused by higher crude oil prices and increased tax rather than a lack of competition in the marketplace.

Evidence gathered by the OFT indicated competition at a national level was working well though they did have some concerns over the lack of pricing information at motorway service stations.

No evidence was found to back up the complaint that supermarkets were using their profits on groceries to unfairly subsidise fuel prices and drive other retailers out of business. The OFT decided that supermarkets buying power and high throughput per forecourt allowed them to sell fuel more cheaply than competitors. Supermarkets have increased their market share from 29% in 2004 to 39% in 2012 and in August 2012 were able to sell fuel an average of 2p per litre cheaper than oil company owned fuel stations and 4.3ppl cheaper than the independents. Though the OFT didn't find any evidence of unfair competition, "it will continue to consider any credible evidence it receives”.

The OFT found that petrol has risen in price from 76ppl in 2003 to 136ppl in 2012, diesel from 78ppl to 148ppl. Increases in taxation of 24ppl and crude oil prices of 33ppl accounted for the vase majority of the rise.

The OFT's Chief Executive, Clive Maxwell said: "We recognise that there has been widespread mistrust in how this market is operating. However, our analysis suggests that competition is working well, and rises in pump prices over the past decade or so have largely been down to increases in tax and the cost of crude oil.

"Our call for information has not identified any evidence of anti-competitive behaviour in the fuel market at a national level, where competition appears to be strong. There may be some issues at a local level. Where we receive evidence of potential anti-competitive behaviour we will consider taking action. For example, we have recently opened an investigation into the supply of road fuel in the Western Isles of Scotland.”

So there's not going to be a government body sorting out fuel prices for us and we just have to live with it. Possibly just as well if you look at the effectiveness of the "cheapest energy prices for all” policy followed by the energy companies putting the prices up by an average of 8.5%.

Check out petrolprices.com to find your cheapest local petrol, and MoneyMaxim can help keep the cost of renewing your car insurance down.