Despite the fact that the number of uninsured drivers has fallen by 25% in the last five years, the UK has one of the worst records for this offence in Western

Despite the fact that the number of uninsured drivers has fallen by 25% in the last five years, new research reveals that the UK ****has one of the worst records for this offence in Western Europe. 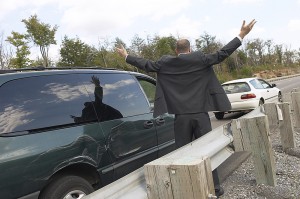 New figures released by the Motor Insurers' Bureau (MIB) reveal that a shocking 1 in 3 (34%) of all uninsured drivers are under the age of thirty.

In fact, according to the study, 1 in 10 drivers among the 18 to 34 age bracket are unaware that car insurance is a legal requirement.

A total of 4% of the 34 million vehicles circulating on UK roads today are uninsured, according to the study.

Every year, uninsured and untraced drivers injure up to 23,000 people and kill 160 people on the British road. Aside from the cost to human lives, uninsured driving costs about £500 million per year, a price that is paid by all honest motorists to the value of a £30 per insurance premium.

Furthermore, the MIB says that uninsured drivers are five times more likely to be involved in road collisions, to fail to comply with other road traffic requirements, and to be engaged in other criminal activity.

The fact that the UK has the highest levels of uninsured drivers in Western Europe is certainly worrying news.

West Midlands, West Yorkshire, Greater Manchester, London Metropolitan and Merseyside are among the areas with the highest concentration of uninsured drivers. According to the statistics, uninsured drivers in these regions exceed the national average by eight times.

Bordesley in Birmingham is the area where more motorists drive without car insurance than anywhere else in Britain. 17 out of 20 of the worst postcodes for the offence are in the West Midlands and West Yorkshire.

"We cannot stand by and let uninsured driving continue; otherwise the honest motorist will keep paying the bills for the injury and damage caused to people and property,” said Ashton West, Chief Executive at MIB.