The Comision Nacional del la Competenmcia (CNC) – Spain's competition commission, have imposed fines totalling over 35 million euros to 17 car hire firms and 2 associations who operated a cartel in Spain, fixing prices of both of car hire and extras like baby seats and additional drivers.

The cartel operated from May 2005 to October 2011 and particularly affected the regions of Catalonia, Valencia, Andalusia and the Balearic islands. According to the press release: "The purpose of the agreements adopted by the cartel members was to fix prices (either minimum prices or by directly increasing those prices, as well as maintaining them during specific periods) and to establish a common commercial policy with respect to the beginning and end of each season (high, mid and low) and for extras and the associated prices (surcharges for baby seats, additional drivers, etc.).

"The companies involved were fully aware of the unlawful nature of those agreements, as they created a system to evade controls by the antitrust authorities and designed a mechanism to supervise performance of the agreements adopted by the cartel, centring on the Chairman of the ASOCIACION EMPRESARIAL DE COCHES DE ALQUILER DE ANDALUCÍA (Car Rental Business Association of Andalusia or AECA).”

The heaviest fine was imposed upon Goldcar – at €15,456,219 representing over 40% of the total, Centauro Rent-a-car, Record-Go and Automotivecars Malaga also received substantial fines. The full list follows: 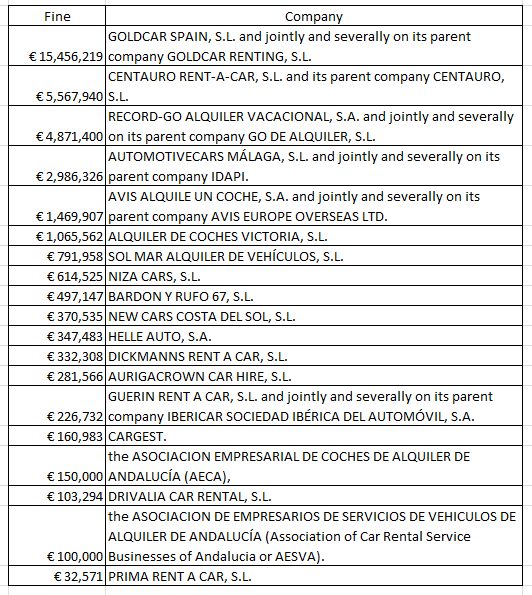 As the whistle blower, Sol Mar were granted an exemption from payment of its fine.

The good news is that the Spanish authority has identified and cracked down on this activity and hopefully the companies will be keen to put their house in order. And knowing who did what and to what extent can help guide you when choosing who to hire your car from in Spain.