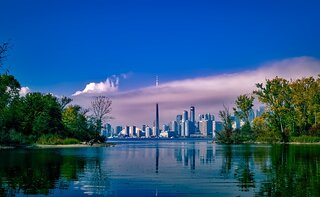 Toronto Pearson airport is the largest and busiest in Canada and about 14 miles to the northwest of the city. It is the primary hub for Air Canada and also a hub for WestJet. With hundreds of domestic flights this airport sees a large number of travellers passing through on to connecting flights to more remote areas of the country.

There are two terminals at the airport Terminal 1 and Terminal 3. Terminal 2 was demolished in 2007. Several flights leave and arrive daily for London Heathrow.

Which car hire companies are available at Toronto airport?

The well-known car hire companies have desks at the airport and these include:

There are also a number of car hire companies with offices off-airport such as ACE rent a car, Europcar and SurPrice.

Where are the car hire desks at Toronto Pearson airport?

Pre-Covid there were car hire desks at both terminals but currently the desks are only on Level 1 of the Terminal 1 parking garage where you can also find the cars. Off-airport rentals can be cheaper and many companies are based at Viscount Station. Some of the companies offer a pickup and shuttle service to Viscount Station but it can also be reached via the Terminal Link train.