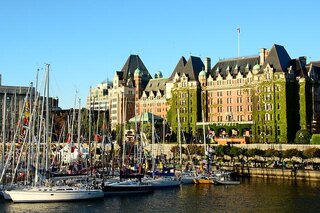 Victoria is the capital of the province of British Columbia despite the fact that it actually sits at the south end of Vancouver Island so is separated from the mainland. Vancouver Island is a popular tourist destination not just for foreigners but also with Canadians.

Victoria airport is to the north of the city and serves around 2 million passengers every year. There are regular non-stop services to several domestic destinations including Toronto and Calgary. There is also a service operating year round to Seattle in the USA.

Where are the car hire desks at Victoria airport?

The on-airport rental firms have their offices in the arrivals hall at Victoria airport opposite the Information Desk.

For the off-airport companies you will need to arrange pick up from the airport with them. The pick up area is the other side of the crossing outside the arrivals end of the terminal.

The rental cars for the on-airport suppliers are located in the car park to your right as you exit the terminal building. You will also drop the car back here on your return.