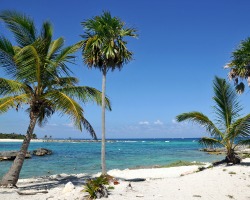 You can drive in Mexico using a UK driving licence but it is worth checking the terms of your hire agreement to ensure they don't specify an international driving permit. The last thing you want is to get to the car hire desk and find you do not have the right paperwork.

Driving standards aren't high and there are increased risks from badly maintained roads, animals and people on the highway. According to the Foreign and Commonwealth Office travel advice many local drivers take to the roads without any insurance.

Terms and conditions vary considerably in Mexico and you may find different terms apply for those by a given hire firm when booked through different brokers or directly.

Normally fuel policies are full to full, but we have seen some full to empty - where you are charged for a tank of fuel and won't be refunded if you don't use it all.

Be wary of Airport Fees and State Taxes - most rentals include them in the headline price shown but not all, both can be double figure percentages and vary by state and airport. National & Alamo sometimes don't include either or both of these in the price reported to the website but do at least show the figures as additional charges to be paid at the counter.

Most car hire in Mexico will come with Collision Damage Waivers and Theft Waivers, though this often includes substantial excesses which can exceed US $1,500 on modest cars and double that on larger or 4x4 vehicles.

Compare car hire excess insurance rather than pay locally and cover the excess as well, you can be covered for damage to tyres, windscreens and underside of the vehicle - areas usually excluded from hire company collision damage waivers.

In December 2012 the Mexican government reformed its labour laws (code 502 of the Mexican Labor Law) to substantially increase liability compensation settlements for fatalities. The actual amounts are based on the minimum wage in the particular state. This figure used to be multiplied by 730 but it is now multiplied by 5000. To oversimplify, before the reform the maximum liability for causing the death of a (single) Mexican in an accident would have been around US $45,000 (though anecdotal evidence points to actual settlements of around half that). The reform increased that figure to around US $300,000 which is now the minimum amount most Mexican (non-hire) car insurance policies provide.

Unfortunately many car hire firms do not make it particularly easy to establish how much third party liability insurance is included with the rental. Where they do, the amounts are often inadequate, so we would strongly suggest that you check how much you have and consider whether this is suitable for you on your trip!